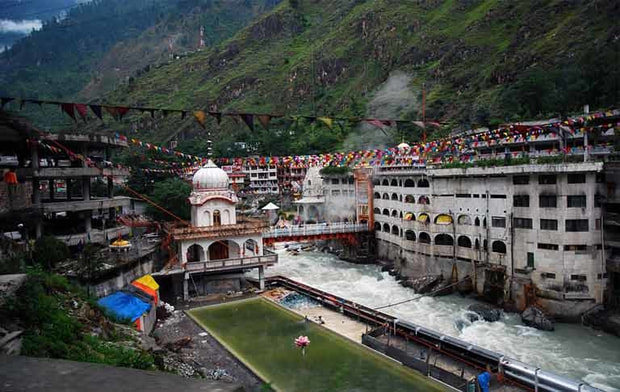 Lined with structures of religious importance, Manikaran is a sacred town of Himachal Pradesh. The town lies next to the river Parvati and is said to have been reconstructed by Manu, the originator of humankind, after the floods that took over the entire world by surprise. Manikaran is located in the kullu district of Himachal Pradesh, 85 km from Manali. It is also famous for its hot water springs that are known to be remedial in nature.  It is believed that bathing in river Parvati can really protect you from a lot of medical issues. In fact, the mythology has it too.  According to the stories, Shiva and Parvati had spent a part of their lives in Manikaran. Once, during their stay here, Parvati lost a piece of her jewellery in the river and no matter how many times the river was searched, her gem couldn’t be found. This angered lord Shiva, who then opened his third eye as a way to punish the river and the entire planet. On fearing complete destruction, gods approached the shesh nag, a revered snake, to help them ease down Shiva’s anger. The snake hissed and as a reason, springs of hot water came out from the river, bringing along the piece of jewellery that Parvati had lost.  This is how the hot springs came into existence.
Guru Nanak dev ji Gurudwara, named after the first guru of Sikhism, is another famous tourist spot for the believers and peace seekers. Free langar is served here in the name of god and could be cherished equally by one and all. The pilgrimage town also hold one of the holiest peeths of Hindus known as the Kulant Peeth. People of all religion come here in great numbers to pay obeisance to their gods. Manikaran in itself is the valley of the gods.
​