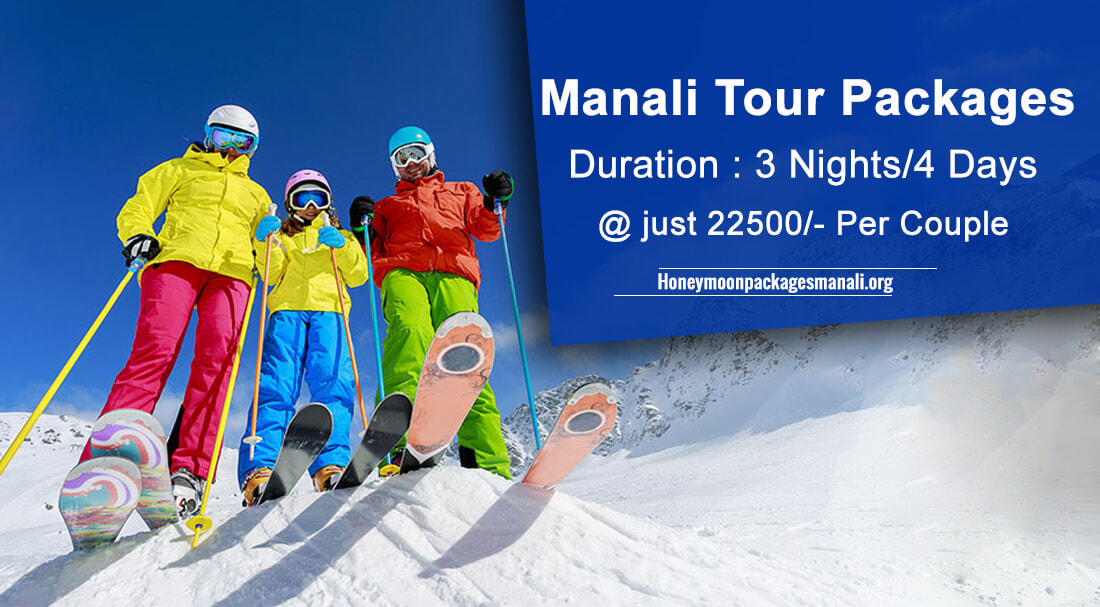 Morning on Arrival Pickup and Transfer to Manali Via Chandigarh . At the northern end of the Kullu valley sits the ancient site, but modern town, of Manali. It is a pleasant, if overdeveloped, town with lovely forests and orchards nearby for hiking, and good facilities for visitors. In the 1970s and 1980s, Manali was very much a 'scene'. In summer, the town would attract numerous western hippies and travelers drawn by the high quality marijuana that grows in the area
Evening on arrival check in the hotel overnight stay

Day 2 : Manali Sightseeing
Morning after breakfast leave for half day sightseeing tour, Evening free for strolling on Mall Road and Shopping in local Market. Late evening drive back to hotel. Dinner and night stay in hotel at Manali. Dinner at hotel. Night Hotel in Manali.

Vashist springs and temple in a tiny hamlet situated on the bank of Beas River that turns towards Rohtang. It is well known for its hot sulphur springs and temples. Taking a dip in this water is considered sacred by many. Nearby is the pyramidal stone temple devoted to Vashist Muni, a revered sage, Nehru Kund is a natural spring in the region. Located at a distance of around 6 km from Manali, it has been named after the late Prime Minister Jawahar Lal Nehru. The Kund has derived its name from Nehru, as he used to drink water from it, on his journey to Manali,

Van Vihar which is a municipal garden is situated in front of the Tibetan market on Mall Road. In the lake located within the park, tourists can opt for boating. The park is adorned with big deodar trees.
​
Day 3 :  Manali – Snow point (Direct Payment Basis)

Rohtang Pass (3979 m): Rohtang pass is 51kms. From Manali on highway to Leh. It offers a panorama and spectacular view of Mountains. The pass is open from May to October each year although trekkers can cross it earlier. It is a gateway to Lahaul Spiti, Pangi and Leh valley. There are beautiful sights of glaciers, peaks and Chandra river flows down in the Lahaul valley. ( If Rohtang Will be Closed We will show you Solang Valley where you can enjoy skiing, zorbing, paragliding and many more adventures sports  )
​
Rahala Water Falls: 16kms. On the way to Rohtang pass. If one goes to Marhi on foot from Kothi from the old road, the sight of the falls is fascinating. It is a good picnic spot as well.
​

Check out from hotel and drive to Delhi. Evening Reach Delhi and Fly back to Home with Sweet Memories
<
>
Manali
Nestled in the laps of the Himalayan Mountains, Manali is a beautiful resort town of Himachal Pradesh. With a population of just about 8000, it is a centre of peace & tranquillity. Comes December and a carpet of soft white snow covers the entire town in its huge protective arms. However, what makes Manali different from the other hill stations of its kind is its capacity to hold glaring adventures at its very heart. So while you can take your date out into the lush green lanes of the apple orchards surrounding Manali, you can even, in case your spouse is more of an adventure seeker, take them to trek along the Rohtang Pass or to raft in the river Beas. Also, Manali is a heaven for all the nature lovers. It is best to move through the old Himalayan villages on a mountain bike. Not only does the bike provide you a closer look into the simple lives of the mountain people, it also lets you dump you cars and breathe in the healing air of the mountains. Manali is a balanced mixture of modernity and customs and to prove the same on one hand we have the mall road and on the other, the ever-present Hidimba devi temple. Built in 1553, it is a living example of India’s glorious architectural history. The temple is on the name of Hadimba, sister of Hadimb who has been described as a ruler of the mountains in Mahabharata. If you want to get into the heart of the place, you must visit old Manali. This is the place where the old meets the new. Although you won’t be able to access all the modern facilities of comfort here, yet, one step inside the town and you will suddenly find yourself into a whole new world of ancient times. If you are a lover of history, old Manali will serve as a medicine to you. You have hundred reasons to be at Manali. One of them is the hotels. No matter how light or heavy your purse is you will be able to find a decent hotel for spending the nights. Manali has something for everyone and a lot for those who are patient enough to go through its forgotten lanes and look into the windows made of wood.