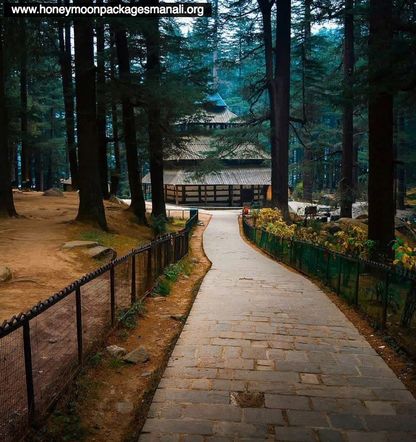 Built in 1553 by Raja Bahadur singh, Hidimbi devi temple is a story of love, sacrifice and repentance!
In Mahabharata, there is a story about Hidimba, the demon ruler of mountains and brother of Hidimbi. It is told that Pandava spent a part of their 14 years exile in Himachal Pradesh, where Bhima, one of the five brothers, killed Hidimba and married his sister. When Bhima decided to leave the town, Hidmbi refused to come with him and chose to stay back, meditate and pray to the gods rather. Impressed by her dedication, the gods relented themselves and bestowed her with the status of a goddess, an incarnation of Shakti!

And that is how the temple came into existence!

The temple is situated at about 3 km. from the bus stand and could even be reached on foot from old Manali. Away from the hustle bustle of the town, the temple is located in the middle of pine trees. The location is quite breathtaking and rejuvenates you not just physically but spiritually as well. From afar, it looks something like a Buddhist monastery. But a closer look tells you how intricately the little details have been done. The temple has been built in pagoda style of 4 tiered roofs.  As you enter the temple a porch with a bench to sit on welcomes you warmly. The windows are made of wood and are carefully carved out of the temple, giving it a look of a rich ancient house. The architecture is marvellous considering how old the temple is and the entire structure still is considered by many localities as a pillar of protection from the ghosts, demons and ghouls. All and all, a visit to Manali is incomplete without the Hidimba devi temple.

Other Attractions in Kullu Manali