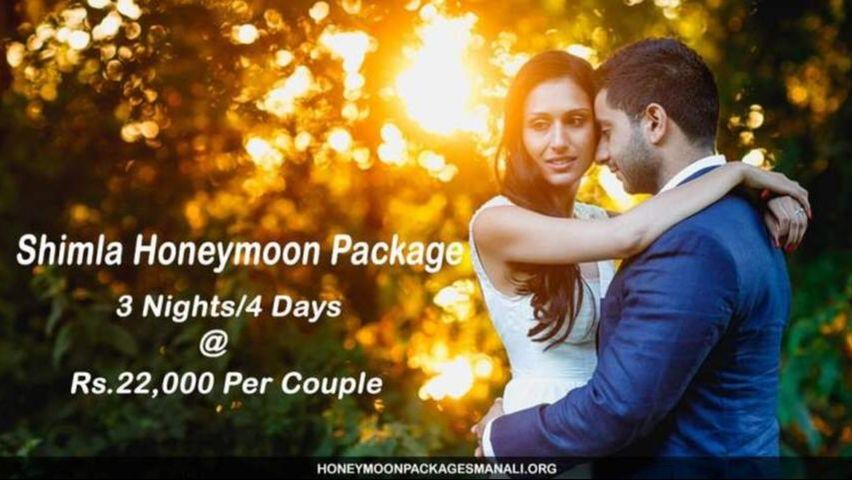 On arrival Pickup from Delhi IGI Airport or New Delhi Railway Station Transfer to Shimla by personal Swift Dzire Car . Lunch on the way. Shimla is the capital of the northern Indian state of Himachal Pradesh, in the Himalayan foothills. Once the summer capital of British India, it remains the terminus of the narrow-gauge Kalka - Shimla Railway, completed in 1903. It’s also known for the handicraft shops that line The Mall, a pedestrian avenue, as well as the Lakkar Bazaar, a market specialising in wooden toys and crafts.
Over Night stay in Hotel
​
Day 02 : Shimla Sightseeing

Today after breakfast in the hotel, full day excursion to Kufri and Fagu. Return to hotel in the afternoon and Rest of the day is at leisure. Dinner and overnight stay is in the hotel.
Day 04 : Shimla - Delhi (380 Kms/ 8 Hrs)

<
>
FREE RESCHEDULING IN CASE OF LOCKDOWN & COVID-19 PANDEMIC
​
Showing Best Shimla Honeymoon Packages
Now book Shimla Honeymoon Packages according to your budget, From travelling to sightseeing to resting we take care of all your small & big needs. here is the variety of good hotels in Shimla you make like
Shimla Travel Guide
Altitude : 2,130 m above sea level
Temperature : Between sub zero in winters and 30 C in summer. Through out the year.
Best Season : (Summer/Winter)
Clothing : Light Woollens/Heavy Woollens
STD code : 0177
​Shimla The former summer capital of the British in India, This Beautiful Hill Station has been blessed with all the natural bounties which one can think of. It has got a scenic location, it is surrounded by lush green hills with snow capped peaks. The spectacular cool hills accompanied by the structures made during the colonial era creates an aura which is very different from other hill stations. best time to visit Shimla is summer season, while for snow lovers its late November to February
Shimla Tourism Info
12 Must Visit Places in Shimla
Best time to visit Shimla for Honeymoon
Shimla is the most famous hill station in north India. Temperature and scenic beauty of Shimla makes it a year round destination for tourists from India as well as from abroad.  Best time to visit Shimla for Honeymoon is the winter season. The awesome experience of the snowfall in Shimla in the months of December, January and February when the temperature drops down to zero and below allures many to come here every year. While Shimla is great tourist hub in summers too during the months of April, May and June when tourists from plains run towards hill stations.
Travel Tips for Tourists Visiting Shimla
Top things to do in Shimla
Shimla Honeymoon Tour Information
Things to carry while travelling to Shimla
Last updated on - 16 March 2022 , 05.20 AM